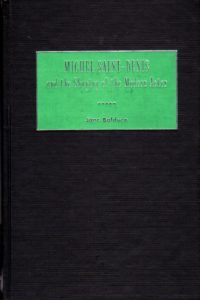 Jane Baldwin, who holds a Ph.D. in theatre from Tufts University is a member of The Boston Conservatory faculty, where she teaches Acting, Dramatic Literature, and Humanities.  She is the author of Michel Saint-Denis and the Shaping of the Modern Actor.  She has edited a reissue of Saint-Denis works, entitled Theatre :  The Rediscovery of Style and Other Writings, to be published by Routledge Press in 2008.  Her articles (in English and French) on acting, training, and production analysis have appeared in Theatre History Studies, Theatre Topics, Theatre Notebook, and L’Annuaire théâtral, among other publications.  She is presently writing a biography entitled A National Drama:  Jean Gascon and the Development of Canadian Theatre, which is being published by Southern Illinois University Press.

Her book follows the professional life of Saint-Denis from his apprenticeship with his uncle Jacques Copeau through the experiment in Burgundy, to the Compagnie des Quinze, the London Theatre Studio, the BBC, the Old Vic, the Centre de l’Est, the National Theatre School of Canada, and the Juilliard Drama Division.  She analyzes his pedagogical techniques, his directing methods, his key productions, and his vision of theatre.  His work is summarized in these words.  « If one were forced to reduce Saint-Denis directorial, pedagogical and political ideas to a precept, it would be balance. He believed that the theatre should be practiced with passion, but also detachment. Without passion it is emotionally meaningless, without detachment it is intellectually void.»

Madame Gompel had lost much of her fortune because of the Depression and had to reduce her patronage.  The Quinze’s expenditures, however, continued to mount. Forced to tour, the company had constant transport expenses for the personnel, sets, and materiel. A bill for £150 from the British tax office took Saint-Denis by surprise. Unable to raise the money, he was obliged to borrow, not knowing how he would repay the loan.  Holding the company together was becoming increasingly difficult and he feared its dissolution.
Jean Villard and Aman Maistre decided to take a different professional path. In England, the Quinze had been invited to a gala where representatives of the company were to entertain. Only Villard and Maistre, having retained several songs from the Copiaus days, were able to get up an act on short notice. On the strength of the audience’s response, the two men left the company for a prosperous singing career as Gilles and Julien.
By now, Saint-Denis’s leadership was continually challenged. Obey and Michel’s relationship had been undermined by the defection of a number of the actors.  Their admiration for Obey’s work had developed into adulation for the man. Flattered, Obey allowed himself to be convinced that he was capable of directing a company.  A new troupe was assembled; Marie-Hélène and Jean Dasté and two student-apprentices left for Madame Gompel’s château. Those loyal to Saint-Denis comprised Madeleine Gautier (who had become his lover), Auguste Boverio, Marguerite Cavadaski, Pierre Assy and Pierre Alder. Michel had been dealt numerous hard blows: the depletion of the troupe, the loss of the company playwright, and with his disappearance, an end to subsidy.
The existence of the Quinze was predicated on a working collaboration between actors and playwright. Neither Saint-Denis nor the actors seem to have considered producing any but original works. Their rejection of the established repertory created various problems. Audiences were not always receptive to new plays. Obey, as house dramatist, was under constant pressure to create. It became obvious that one playwright was insufficient. Because playwriting was viewed as a joint venture, much of the company’s time was spent developing material. And, since they were slowly building a repertory, their offerings remained limited.
Despite the reversals, Saint-Denis, who had always provided the momentum for the Quinze, refused to abandon his unfinished task and set about rebuilding. His immediate problems were the replenishment of the company, developing material, and, of course, funding. Although the growing artistic reputation of the Quinze with its commitment to revitalizing the theatre had begun attracting young actors « frustrated in their aspirations by the existing commercial theatre, » the reconstruction of the company proved difficult.  As Saint-Denis pointed out: « The kind of actor I wanted was not to be found ready made. »  Many of the young disciples such as Marius Goring and Vera Poliakoff were foreign, reflecting the appeal Saint-Denis’s work had abroad.
After six months’ struggle, Saint-Denis succeeded in adding seven newcomers to the company, reached an agreement with Charles Dullin whereby the two troupes would share the Atelier for a period, and discovered Jean Giono.  Giono, a well-known novelist, was inspired to write his first play Lanceurs de graines (Sowers of the grain) after watching the Quinze rehearse. Following a brief Swiss tour, his play opened at the Atelier, where the troupe was warmly welcomed by Dullin, on November 8, 1932.  Lanceurs de graines met with disfavor and disappeared from the Quinze’s repertory. The actors thought it unplayable, which was evidently not Saint-Denis’s opinion, since he revived it later in translation in London. In the absence of Marie-Hélène Dasté, Madeleine Gautier designed the costumes.
By December, Obey and Marie-Hélène Dasté had rejoined the troupe; Obey, who lacked Saint-Denis’s directing talent and persuasiveness, had been unable to work with the refractory actors.  His return temporarily alleviated Michel’s financial worries since Madame Gompel’s money was again at the Quinze’s disposal. In the interim, Saint-Denis had been working hard to resolve the company’s precarious fiscal situation that had been aggravated by the Swiss tour. Capitalizing on his prestige abroad, he gave a series of lectures in Brussels, Amsterdam, and London while trying to find engagements for the company.
Dullin’s proposal to share the Atelier with Saint-Denis’s troupe had been prompted by several factors. Admiration of the Quinze was clearly one; his theatre practice had much in common with that of Saint-Denis’s troupe. The Atelier enjoyed a prestigious reputation yet was chronically threatened by irate creditors, partly because of Dullin’s frequent refusal to extend the engagements of his successful productions.  In spite of critical acclaim, Dullin was feeling the need to reformulate his ideas. Joining forces with the Quinze would allow him more time because he would have fewer plays to direct, and perhaps their presence would help pay the bills. Given the Quinze’s history, Dullin’s hopes seem unrealistically optimistic.
The benefits for the Quinze were obvious. Extending their Paris season would limit the time they would have to spend on the road, while their association with the Atelier could only raise their standing in the theatrical profession. The two companies intended to alternate performances for at least six months and share expenses and box- office receipts, with each maintaining its artistic independence. Saint-Denis and Dullin outlined their plans:
We are uniting our efforts, not merging them. United materially, united by a commonality of artistic views, we remain independent. Each of us has his troupe, his repertory, his own means of production. Through this union, we hope not only to increase the number of productions, but to add variety. Let the public benefit from this friendly rivalry between the Atelier, an experienced company concerned with renewal, and the Quinze, a new company, which should, sheltered by its senior, strengthen its growing renown.